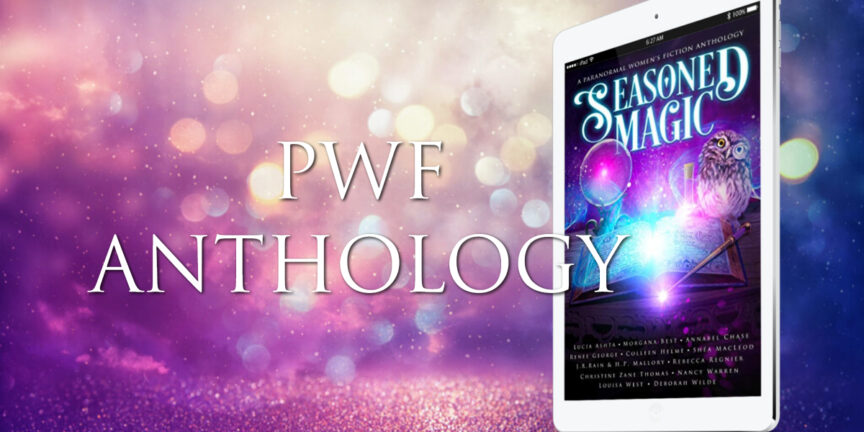 The Seasoned Magic Authors have joined forces to bring you the first Ever Paranormal Women’s Fiction Anthology!!! Read on about this anthology PACKED with PWF stories from some of the genre’s best selling authors.

Midlife can be magical. That’s the idea behind Paranormal Women’s Fiction, where you’ll find women of a certain age kicking ass. These are powerful creatures who know what they want, who they are, and won’t let anything get in their way—not exes or demons, hot flashes, crow’s feet or crime.

Luanne and Shawna head out of Gales Haven for the day, expecting to drink a little too much and dance the night away. What they don’t expect is to unearth secrets they believed long buried. Secrets that mean a whole new kind of trouble for the Gawama witches.

The world is determined to put 60-year-old Cally Colt out to pasture, but she’s no one-trick pony. When she’s suspected of murder, Cally must clear her name, keep a horse rescue financially stable, and stay alive. Will she do it, or is she on a foal’s errand?

During an overnight visit to a historic house, Mia discovers she isn’t the only thing that goes bump in the night.

Renee George – The Importance of Being Gilly

Midlife dating is all fun and games until someone falls into the flambé and catches on fire… When Nora Black’s BFF Gilly Martin requests her help, Nora agrees to employ her psychic nose for the good of her bestie’s future.

A PI license, a stolen figurine, and the sinister plot behind it… another day for mind-reader, Shelby Nichols, that could be deadly.

Shéa MacLeod – Some Enchanted Reading (A Season of the Witch Novella)

One unexpected tarot reading, one enchantment gone awry, and one very befuddled witch in dire need of a cocktail.

The women of Haven Hollow aren’t your typical forty-something singles. Between potion-brewing and booze, Poppy accidentally knocks two potions on Wanda’s cat, who immediately vanishes! Then it becomes a mad dash to find Hellcat in order to reverse whatever magic Poppy inadvertently subjected him to.

The newest neighborhood in Widow’s Bay is an HGTV addict’s dream! But while the floorplans may be open concept a curse is closing in. Only the empty nest coven can save the sinking shiplap!

After exhausting all the dating apps available, Lauren Whittaker tries a spell. Surely, her dating life can’t get any worse. But magic always has a way of complicating things.

Seattle witch Quinn Callahan knew she wasn’t supposed to mess with death. Now, the Grim Reaper’s turned up at her book club and he’s not there for the gossip and the cheese plate.

Louisa West – You Look ‘Familiar’ (A Midlife in Mosswood Novella)

One near-miss with a kangaroo and vet Veronica’s highschool sweetheart has bounced back into her life. Is this her chance to reconnect with the one that got away, or will he skip town for good and take his strange secret with him?

Miriam Feldman had high hopes for her big date, but a body count wasn’t one of them. Now it’s up to her and a grumpy French wolf shifter to hunt the possessed man down before anyone gets hurt.